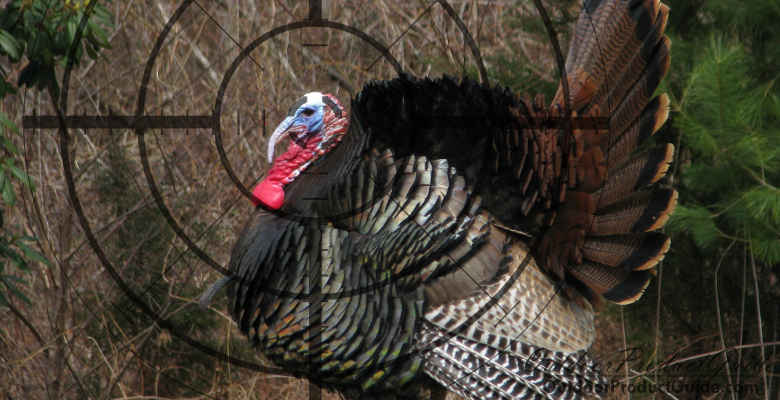 Interested in buying a new choke for turkey hunting in 2020? Here are a few things to look for that will help you choose the right one.

We all know that dense patterns are what matters most when turkey hunting and finding the right choke to deliver pellets on target is often not easy to find. Through extensive patterning and testing, I’ve found the best choke for turkey hunting is the Carlson’s Long Beard XR. I’ve used it for years and it’s always gotten the job done.

Below are the top 3 best chokes for turkey hunting that I’ve had good success with across a wide range of different shotgun and ammo combinations.

These are the Top 3 Chokes for Turkey Hunting in 2020:

I’ve gone through countless chokes and ammo combinations trying to find the best patterns. After years of patterning, these are the top 3 chokes that have performed the best and were the easiest to get 80% or better pellet density at up to 50 yards.

These are the three chokes for turkey hunting you should consider in 2020:

Carlson’s Long Beard XR Choke Tube (click to check the price at Amazon) – Carlson’s is a leader in turkey choke tubes for both quality and patterning results. The Long Beard XR works EXTREMELY well with my Mossberg 935. I’ve been able to achieve over 85% pattern density at 40 yards with this choke and the Winchester XR ammo. This is my top pick. 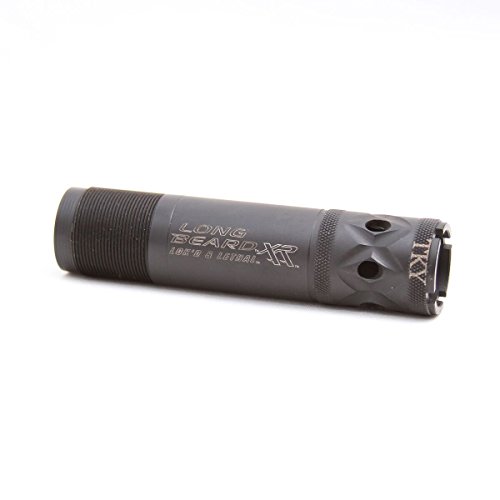 Hevi-Shot Hevi-13 Turkey Choke Tube (click to check the price at Cabelas) – If you’re using Hevi-shot ammo on your turkey hunts, give the Hevi-shot turkey chokes a try. They’ve been specifically designed by Hevi-shot to be used with their ammo. The 13 g/cc high density pellets make even 7 shot a viable turkey load at 40 yards. This is the best choke and ammo combination if cost isn’t a factor.

TRUGLO Head Banger Turkey Choke (click to check the price at Amazon) – Before I switched to the Carlson’s Long Beard XR, the Truglo Head Banger was the choke I always depended on. It works really well out of my 20 gauge Remington 11-87 and the patterns are always dense out to 40 yards. This is your budget option. 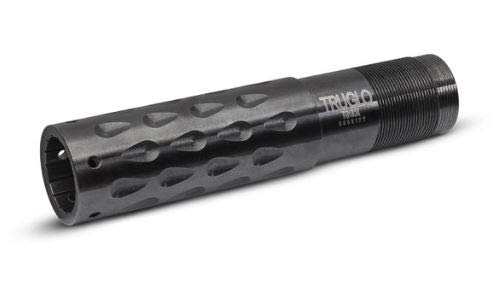 Why I Picked the Carlson’s Long Beard XR Choke Tube

When you sit down and compare the Carlson’s Long Beard XR to the Hevi-13 Turkey Choke and Dead TRUGLO Head Banger, the differences are noticeable.

Here is a great clip of what you can expect to achieve with a good choke for turkey hunting.

Features to look for in quality chokes for turkey hunting:

About Chokes for Turkey Hunting

The ideal turkey choke can deliver incredibly dense patterns at long ranges. Let’s face it, if you’re all about jelly heads, putting a mass of pellets on target is what you’re aiming for. For that to happen though, you need to have a bunch of factors working in your favor.

Below are the common types of chokes for turkey hunting and what makes them so effective.

Types of Chokes for Turkey Hunting

The best chokes for turkey hunting are always extended ported chokes like the Carlson’s Long Beard XR. They consistently win most turkey shoots with the right ammo combinations.

Extended chokes are ideal for turkey hunting because they provide a platform for tighter constrictions and wad technology improvements beyond that of flush factory chokes.

To kill old toms at long ranges consistently, an extended ported choke is the best starting point to developing a tight pattern that will produce great results at 50 yards or more.

On my last turkey hunt, I was able to get 3 toms to strut at 55 yards but they just wouldn’t commit past that point. Don’t get me wrong, my preferred range is 20 yards or closer, but sometimes the stars just don’t align.

Needless to say, I wasn’t thrilled with taking the shot, but I knew the choke and ammo combination I was using was easily capable of dispatching even the largest Tom at that distance. I was using the Carlson’s Long Beard XR choke with Winchester’s Long Beard XR ammo.

The previous spring I had done some intensive patterning with this choke and ammo combination out of my Mossberg 500 and SBE II with great results from each. With turkey season quickly coming to an end, I ended up taking the shot on the strutting Tom at 55 yards.

The old bird hit the ground hard and upon close inspection I had put 10 pellets into him with some completely passing through. Situations like this are why having a good choke is vitally important for turkey hunting.

Tips on Improving Your Shotgun Pattern for Turkey Hunting

You can greatly improve your odds of harvesting an old tom on your next hunt by trying out one of the proven turkey chokes I’ve mentioned in this review. The Carlson’s Long Beard is my favorite, but I encourage you to look around and try as many chokes as possible to find what works with your shotgun and ammo.