One of the most popular questions we get is how to hide trail cameras from humans. Whether it’s out of sight of other hunters, for home surveillance, or to avoid detection by trespassers and poachers, it’s important that your trail camera stays hidden.

One of the most nerve racking feelings is checking your trail camera and realizing that it’s been stolen, tampered with, or damaged. So we did a little research about what the best ways to hide trail cameras from people are and steps you should take going forward. The best ways to hide trail cameras are to avoid placing at line of sight, install cameras high and out of reach, enclose your camera in a birdhouse or fake rock, or place the camera in a locked box. All of these tips can help you hide your trail camera and reduce the chances it’s detected or tampered with.

Let’s look in to these trail camera theft prevention tactics and what you need to know about them.

How to Hide a Trail Camera from Humans

When you place expensive camera equipment anywhere in world without monitoring it, there’s a good chance it may not be there when you come back. With these tips for hiding your tail camera, the odds that your camera will stay hidden are increased substantially.

List of the Best Ways to Hide Trail Cameras

Avoid Placing Your Trail Camera at Line of Sight

This is as simple as it sounds; don’t place your trail camera where someone would naturally see it. If you’ve spent time in the woods, you know that anything out of the ordinary (i.e. not a uniform tree trunk) will catch your eye.

The level to avoid for camera placement is 5 to 6 feet high. At this level, even someone casually glancing may spot your trail camera with very little effort on their part since it meets their eye line. Your game camera stands a better chance of remaining undetected if people have to go out of their way to look for it.

If you must place your camera within the line of sight considered using a smaller camera like the Primos Bullet Proof 2 which is a subcompact trail camera that can be hidden extremely easy.

One tip that always seems to work well is to place cameras high enough so people can’t reach them easily.  Not only are they unlikely to see it since it’s out of their line of sight, but they have to go out of their way to climb the tree to get to it as well.

The camera will have to be tilted downward to capture images, but still can produce quality pictures and even help increase the range of your photos. If you can conveniently bring a ladder with you to your camera locations, you can cut all the lower hanging branches to eliminate any foot holds for thieves willing to climb.

How Far Can a Trail Camera Take a Picture?

Disguise Your Trail Camera as a Birdhouse or Rock

The best hiding spot is often right in the open. People can’t take what they can’t see. Disguising your trail camera is a tried and true method for protecting your investment.

Some of the best ideas for hiding trail cameras include birdhouses, tree stumps, and fake rocks. The key to each of these methods is the ability to fit into the surrounding environment without drawing suspicion.

Lock Your Camera in a Reinforced Enclosure

Unfortunately, if someone wants your trail camera bad enough, they are going to take it no matter what. That doesn’t mean you can’t make it extremely hard for them to do so by locking your camera up, and you might even stop less prepared thieves from taking it altogether.

Reinforced metal boxes that lock are a good option for adding a protective barrier from people being able to tamper with the internals of your camera. The camera can even be locked to the tree itself with a metal cable. This may prevent someone who isn’t prepared to cut locks or cables from being able to take the camera. 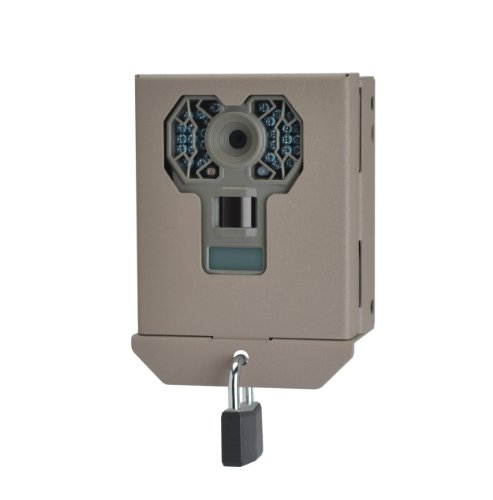 Customize Camouflage On and Around the Trail Camera

Trail cameras like the Cuddeback Long Range IR and the Browning Strike Force HD come with camouflage from the factory. This is a nice feature to have, but one camo pattern doesn’t fit every situation.

You can customize camo patterns by adding bark, twigs, and leaves to the camera housing. This can help reduce its visibility from casual observers and blend in to specific applications. It’s as simple as super gluing the dominant foliage onto the camera so that it blends in.

Another option to help camouflage your trail camera is to add vines or natural vegetation around the camera position itself to break up the profile and give it a natural look. Whichever option you choose, by incorporating natural camouflage within a 10 feet radius of where the camera will be placed can go a long way.

Avoid Creating Trails and Tracks to Your Game Cameras

It’s easy to overlook the fact that constant monitoring of your trail cameras can help develop suspicious features such as foot trails and cleared vegetation signaling a trail camera might be nearby. In order to combat this, make it a point to approach your cameras at different angles each time.

If you can place the camera in areas where the ground is rocky and unvegetated, it will help reduce the chance foot paths are created. Avoid cutting large swaths of vegetation that could look suspicious and funnel someone directly to your camera.

Additionally, be aware that footprints in snow and mud can lead someone directly to your trail camera. If possible, avoid checking game cameras right after heavy rains or snow. Place logs, rocks, or natural material along the path to your camera to help reduce footprints and avoid creating a trail.

Placing trail cameras opposite of human approach can help make them harder to detect. Typical approach angles to avoid include location of trails, roadways, or fence lines which people would typically use for access.

It’s unlikely that most people tampering with trail cameras are randomly walking in the woods. In a typical situation, they usually enter from a roadway or easy access point. Identify these access points for where you hunt and place your camera facing the opposite direction.

Avoid Trail Cameras that Flash or Glow at Night

The evolution of trail cameras started with the standard white camera flash, but has since evolved into No Flash technology. Older flashing cameras should be avoided as their detection at night is a certainty.

Flash cameras were then phased out for the most part since they often spooked game animals and infrared technology improved to the point where it became useful. Many of the early IR trail cameras produced a visible red light making it detectable at night.

Keep Trail Camera Locations to Yourself

As they say, loose lips sink ships, and that’s true for anything you wish to keep a secret. The fewer amount of people that know about your trail camera locations, the better off you’ll be in the long run.

If you must give your camera locations to others, make sure they are aware of any steps you take to help conceal your cameras. If you share photos, double check that GPS coordinates are not displayed on the picture which could lead someone directly to your hiding spot.

Nothing is more frustrating than having your trail camera stolen or damaged. Not only do you lose your photos, you’re out a few hundred dollars at least.

To help hide you trail cameras from people, avoid placing it in the line of sight, add camouflage similar to its natural surroundings, don’t create tracks or paths to your cameras, place cameras opposite of typical human approach, and use only No Glow IR Game Cameras.

With these tips, the probability of your trail camera being discovered by humans drops drastically. Always pay attention to your surroundings when installing and checking trail cameras. You may pick up on clues and habits that you never even knew could be showing others where your cameras are.