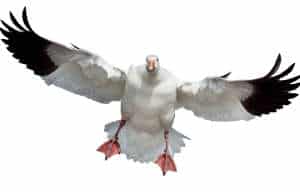 Hunting snow geese without decoys is a growing trend that can be just as enjoyable as hunting over snow goose spreads. Not only is it just as enjoyable, it’s also less expensive, requires less effort, and you can harvest a ton of birds.

Snow geese can be hunted without decoys by setting up in a flight line and picking your shots as they pass overhead. Other methods include sneaking up on geese with the help of hedgerows or levees, and using a cow board to hide behind as you approach a feeding flock.

These are the best methods for hunting snow geese without using decoys.

Pass shooting is one of my favorite methods to hunt snow geese when I don’t feel like setting a decoy spread. After pass shooting for many years, I’ve come to realize what works and what doesn’t.

In order to find a good pass shoot, you have to know the pattern of the birds and the typical routes they take from feeding fields to the roosts they are using. Catching snow geese coming from the roost in the morning to the field they are going to feed in is the perfect scenario for pass shooting.

I usually look for a fencerow that borders the field they are using and conceal myself along it and under the flight path of the birds. Make sure you’re not too close to the birds on the ground or they will spook once you shoot. If there’s a good wind that means the birds filtering in will be even lower in their approach.

Once you’re under the flight line, it’s important not to unload your shotgun at every flock that flies by. Snow geese are incredibly smart, and if birds are stacked up behind the group you shoot at, they will adjust their flight path to avoid you.

Pick your shots by only taking the lowest groups and easiest shot. Many times I’ve been able to limit out on snow geese just by taking a few well timed shots without being greedy. Over the course of an hour or two, the patience adds up to a bag full of geese and flight path that hardly changes.

Putting the sneak on a flock of snow geese is often a controversial tactic. You either love it or you hate it. Sneaking is done mostly during the Snow Goose Conservation season when regulations are more liberal and limits don’t exist.

For sneaking to be effective, you must have access to the field the birds are in. Either using a levee or ditch, you crawl as close to the birds as possible before you take a shot. The harvest totals can be extremely high using this method and it’s not unheard of for a hundred or more birds to be harvested in a single sneak.

I would recommend that if you do apply this method, isolate smaller groups on the edges of the flock and pick your shots at individual birds.  This reduces the chances that snow geese are wounded aimlessly.

3) Use a Cow Board for Snow Geese

If you’ve spent any time watching snow geese, you know that they don’t have any fear of livestock. It’s not unusual to see snow geese and cows feeding amongst each other in the same field.

The Cow Board method looks to utilize the trust snow geese have with cows by creating the appearance of an innocent cow making its way through the field.

Tips for Using a Cow Board for Snow Geese

The most important aspect of using a cow board is approaching geese slowly. A slow moving abject won’t startle them enough to take flight. Don’t get me wrong, they will be suspicious, but they will stay long enough for you to get close enough for a shot.

Cow boards can either be purchased or you can make your own out of plywood. Make sure to cut eye holes to see through to let you know when you’re close enough and a shotgun holder so you can free your hands. I like this Cow Board from Cabelas.

Why hunt snow geese without decoys?

If you’re a diehard decoy hunter you might be asking yourself why someone would hunt geese without decoys. And while decoying geese is a rewarding experience, there are several reasons to ditch the decoys and try something new.

Some of the top reasons to hunt geese without decoys include:

Hunting geese without decoys is a viable option in many scenarios. Let’s face it, many of us don’t have the time or resources to set large spreads of decoys and hunt all day long.

Pass shooting, sneaking, and using a cow board are three methods to hunt geese without decoys that really work. Each have their place, but if used correctly can be very effective for harvesting large amounts of snow geese.

Hunting snow geese without decoys can be fun and productive. Not only is there less effort involved, it also doesn’t take a ton of money like buying a huge decoy spread does.

My favorite method of hunting snow geese without decoys is to pass shoot. Finding a flight path where the birds are flying low and trading back in forth can make for hours of fun shooting.

Using a Cow Decoy may seem funny, but it works. Snow geese often intermingle with livestock as both feed on winter rye and other grasses. Using a cow board to slowly sneak up on snow geese has proven to be an effective method as well.