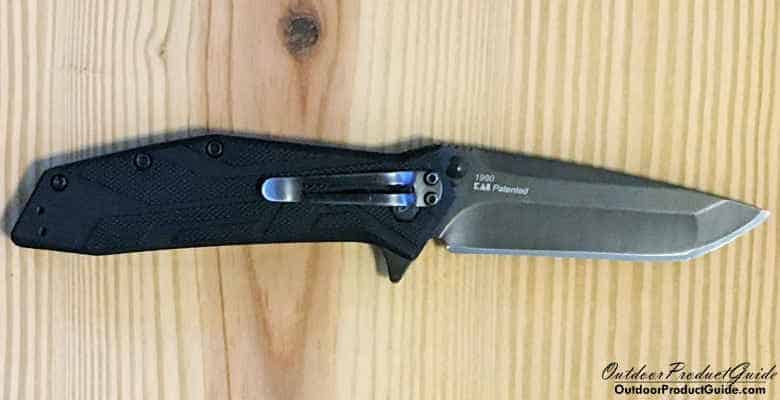 I’ve carried the Kershaw Brawler Pocket knife every day for the past two years. In this review, I’ll discuss how it performed, what I liked the most, and things you should consider before you buy one.

Two years ago I was given the Kershaw Brawler (1990) pocket knife as a gift. I already had an EDC pocket knife that I liked (the Kershaw Leek), but decided to change things up and start carrying the Brawler exclusively. First off, the Brawler with its tanto blade is the coolest looking knife I’ve owned. I was worried that the straight blade design would make cutting certain things like rope difficult, as a serrated blade works better, but the sharpness of the blade more than made up for it.

My only gripe is the blade tends to lose its edge quickly, requiring a monthly sharpening with heavy use. All in all I was impressed with the Kershaw Brawler and would not hesitate to buy another. It clips securely in my front pocket and the Speedsafe lets me open it one handed. The following are my thoughts on the Kershaw Brawler after 2 years of every day carry (EDC).

How does the Kershaw Brawler hold up as an EDC Knife?

I really like this knife! I had my reservations since it’s a relatively cheap knife and I wasn’t totally sold on the blade style, but I was impressed to say the least. The Kershaw Brawler has been my EDC knife for two whole years and it still is right now. That really says a lot.

If you’ve read my review of the top pocket knives currently available (you can see it here), you may remember that the Kershaw Leek came out on top. While the Leek is more expensive and sturdier, the Brawler does offer some of the same design features that make it stand out in it’s class.

You’re probably wondering what kind of use I put this knife through. I would range it from light to moderate use. It was put through the typical everyday tasks like opening packages, cutting feed sacks, and rope. I had no problems making clean cuts on any of the jobs I used it for.

I did notice after 6 months or so that the blade started to get dull. Out of the box it was razor sharp, but it did lose the edge eventually. I’m not sure if 6 months is really good or not, but the light use I put it through was probably more of a factor in keeping the blade sharp for this long. Compared to other knives I own, it’s still similar to the edge retention I’m accustomed to.

Overall, the Brawler held up well and I have no issues with its design and wouldn’t hesitate to recommend it as a good budget EDC knife. I did experience a slight discoloration on the pocket clip, but it’s more of a cosmetic issue than anything else. The locking mechanism is still crisp and works as intended. The blade was super sharp out of the box and remained so for 6 months with light use. I can’t argue with that!

What was I impressed with the most with the Kershaw Brawler?

What impressed me the most about the Kershaw Brawler is the SpeedSafe opening mechanism. Long gone are the days of using two hands to open a pocket knife. Kershaw’s SpeedSafe design has perfected one handed opening.

How does it work? It all starts with raised knob on the backside of the handle. This elevated knob can be depressed with your index finger, causing the blade to fly open and lock in place. This all happens within seconds with a flick of your index finger.

Not only is it fast at opening, its smooth too. I’ve never had it fail to open or lock in place. Once locked in to place, the SpeedSafe mechanism then acts as a front hand guard for the handle. It extends pretty far below the front part of the handle and is curved to help give a comfortable fit.

SpeedSafe is something that I’ll look for on every pocket knife I use in the future. It’s really impressed me and only takes a few uses to master.

Is the Kershaw Brawler a good EDC pocket knife?

My definition of a good EDC pocket knife is one that you can carry easily without it becoming a burden. I’ve had knives that were too heavy or bulky that failed horribly at EDC. The Kershaw Brawler is not one of those knives.

It fits comfortably in my front pocket and most of the time I don’t even know it’s there. The belt clip is low profile enough that it doesn’t knock into things I’m standing next to like counters or vehicles.

It’s not extremely light, but that’s a good thing. It feels sturdy in my hand and is not a burden to carry or use for long periods. I have no plans to replace this knife. It will remain my EDC knife for the foreseeable future.

Would I buy another Kershaw Brawler pocket knife?

YES!!!! Technically I didn’t buy this knife, it was a gift, but if I were looking for a new one, I would buy a Kershaw Brawler in heartbeat. I haven’t discussed price much, but it’s a really affordable knife as well. You can pick one up cheap here at Amazon.com.

I was given the Kershaw Brawler as a gift and had mixed feelings about how it would handle day to day activities. I put it to the test after 2 years of EDC carry and was pleasantly surprised with just how well this knife performed.

The blade was razor sharp out of the box and retained much of that sharpness months later with moderate use. The SpeedSafe mechanism worked flawlessly and I can open the knife one handed at a moment’s notice. I will make it a point in the future to only purchase knives with the SpeedSafe or similar mechanisms for one handed use.

While there were slight discolorations on the belt clip, it’s purely a cosmetic issue from the clip rubbing against things I was leaning against. I didn’t have any other issues with it for the light to moderate use I put it through.

All in all, the Kershaw Brawler did everything I asked of it. It fit well in my pocket and was sturdy in my hand. I carried it every day for 2 years and it did not let me down. If you’re looking for your next pocket knife, consider the Brawler, you won’t be disappointed. You can pick one up cheap here at Amazon.com.