The Status of Waterfowl Annual Report for the 2018 and 2019 waterfowl season has just been released by the U.S. Fish and Wildlife Service (USFWS). The status of waterfowl is a combination of aerial and terrestrial surveys conducted across the Northern U.S. and Canada each year designed to identify breeding success and overall trends in North American waterfowl populations.

The waterfowl population status is provided to the agencies and reviewed by biologists and state leaders to aide in selecting bag limits and season lengths across the United States.  The Status of Waterfowl report is a collaboration between the USFWS, Canadian Wildlife Service (CWS), and various state and local agencies and groups.

The results of the 2018 waterfowl population status survey was an overall decline in most species. A colder than usual spring and delayed ice melt caused nesting to occur later and with less success. Even with below average nesting success, most species remained above their long term population averages.

The full report can be seen at the USFWS Website.

Snow Goose Hatch Report 2018/2019 – The status of light geese revealed that the overall outlook for the 2018 season to be below average across the northern breeding grounds. The Mid-continent population of snow geese that winter within the Central and Mississippi Flyways experienced delayed breeding caused by colder than usual conditions. Expect less juvenile birds in the fall flight this year.

Mallard Population Outlook – The mallard fall flight index is estimated to be 9.3 million mallards for 2018. This is a 12% decrease from 2017, but well above the long term average of 7.9 million birds.

2018 White-fronted Goose Fall Inventory – 771,600 Greater White-Fronted Geese were counted during the 2017 fall survey. This is a 23% decrease from 2016 when 1,000,100 birds were counted. Breeding conditions for Mid-Continent White-fronted geese were below average on the nesting grounds for 2018.

The U.S. and Canada are comprised of 4 different flyways consisting of the Pacific Flyway along the west coast, Central Flyway in the Midwest to the Gulf Coast, the Mississippi Flyway from Hudson Bay down to the middle Gulf Coast, and the Atlantic Flyway which stretches from New Foundland down the east coast of the U.S. to Florida.

While there are co-mingling of birds throughout these flyways each year, these zone serve as the demarcation for federal and state agencies to manage hunting seasons, bag limits, and individual species of concern as they see fit.

There are, however, populations of migratory waterfowl that choose to winter and nest within the same flyway their entire lives. Rules and regulations tailored for migratory bird populations that utilize specific flyways can help manage the overall health of certain populations. 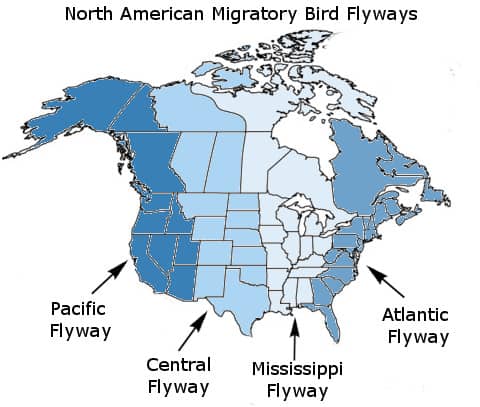 An usually long winter resulted in delayed nesting across Canada and the arctic islands in 2018. As a result, nesting success suffered and almost every waterfowl population decreased due to the lack of juvenile birds that will be in the 2018/2019 fall flight.

The 2018 snow goose hatch was below average due to a late ice breakup and Ross geese nesting at Karrak Lake was almost a month behind. Even with the broad decrease in nesting success, most waterfowl populations remained well above their long term averages.

Expect to see fewer young birds in the fall flight this year, but hunting should still be great regardless.